Przejdź do treści
Help Center
Please note that Trimble is closed July 2nd and 3rd in observance of the 4th of July Holiday.

Please know that there will be a delay with any support tickets that are sent in during this time. Please be patient and know that we will respond as quickly as we can.

Working with Hierarchies in the Outliner

2020 Attention: SketchUp 2020 has changed some words, whenever you see us refer to “objects” that can be either Groups or Components, they still work the same but it’s easier to talk about the two things with clarity now.

In SketchUp, the Outliner enables you to view a model's objects (groups, components, and section planes) as a hierarchical tree. With the Outliner, you can:

To open the Outliner, as shown in the following figure, select Window > Outliner from the menu bar. Your model's name appears at the top of the hierarchy. In this example, the model is named Two story house and within the House group, it contains three objects named First floor, Second floor, and Roof. (The Roof object is hidden.) You also see a section plane called Plan view, although the section plane isn't visible and the section cut isn't active. 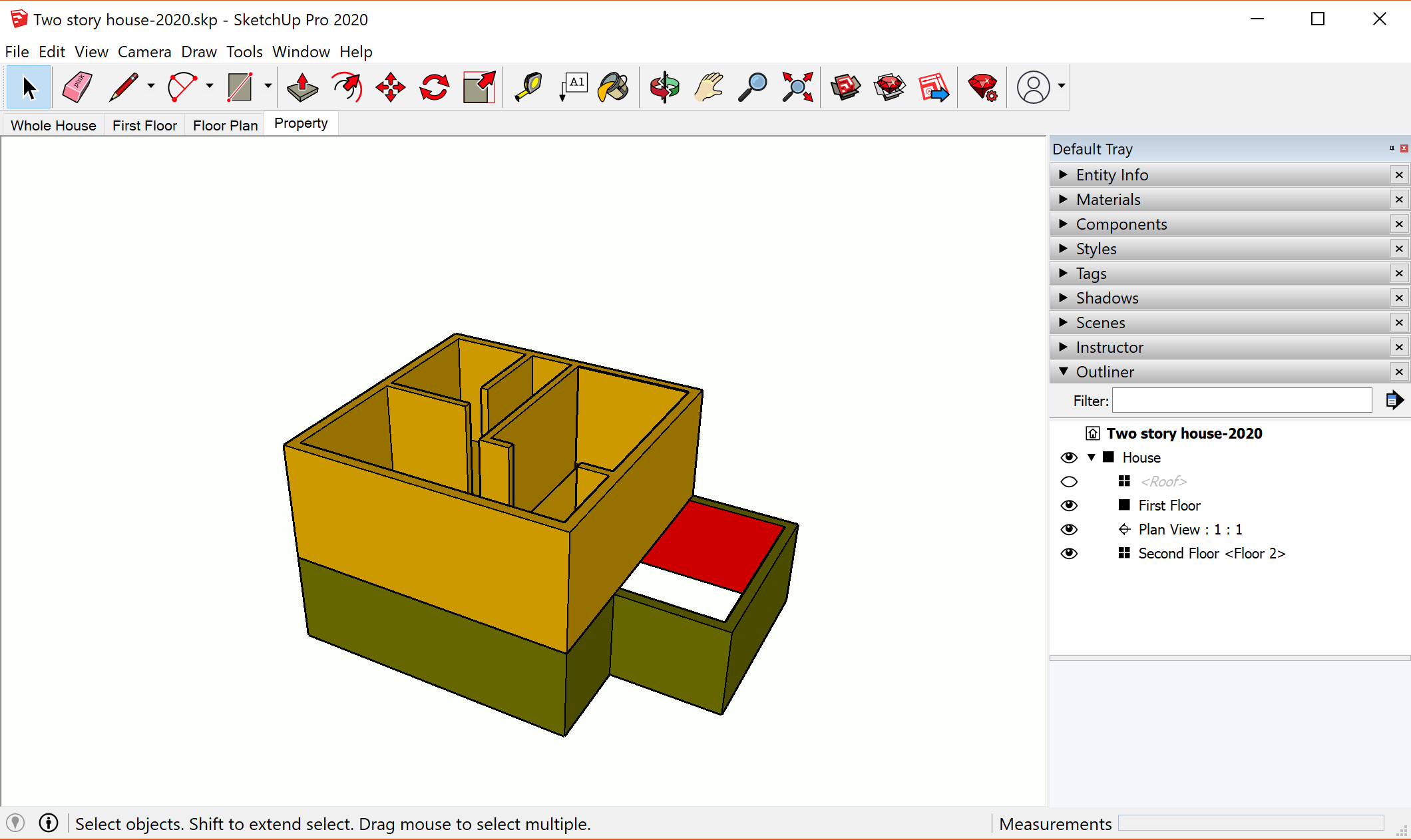 When an object contains nested elements, the Outliner's navigation tree displays a triangle arrow next to the object's name.

You can explore the hierarchy of your model in the following ways:

In the sections that follow, you find details about naming and finding objects and section planes and changing the structure of your model's hierarchy.

Renaming an object or section plane

After you create an object or section plane, the Outliner enables you to give that entity a meaningful name.

Tip: Giving these entities meaningful names enables you and others to find, select, and edit the entities quickly and easily. For example, a meaningful name might describe an object’s location. In a model of a housing development, you might create a group for each plot of land and name it after the plot numbers. As you continue to build the model, you might import SketchUp models of standard house designs, and each component's name would reflect the design name. In the preceding figure, each group was given a more descriptive name than the default name, Group. With the descriptive names, you can easily see which group is the roof, first floor, or second floor.

To name (or rename) a group in the Outliner, follow these steps: 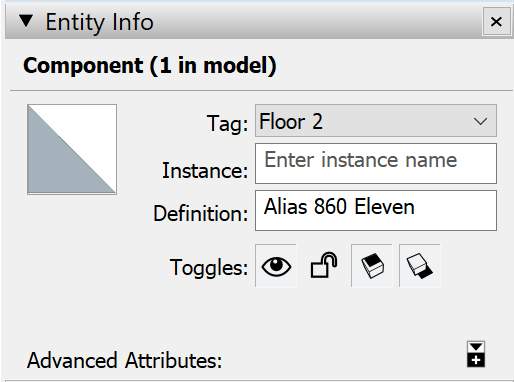 For details about section planes, see Slicing a Model to Peer Inside.

Finding an object or section plane

When you need to find a specific object or section plane in your model, here's how the Outliner can help:

Identifying the status of an object

The Outliner uses icons and text to identify an object or section plane, as well as its status (open, locked, or hidden). The following table shows how the icon and text change as the object's status changes.

If a model's object hierarchy needs to be adjusted, you can click and drag an item to a new position in the Outliner.

For example, say you want the sofa to be tucked inside the First floor group, so that the hierarchy reflects where the sofa is located. Simply drag the sofa component to the desired position, as shown in the figure. 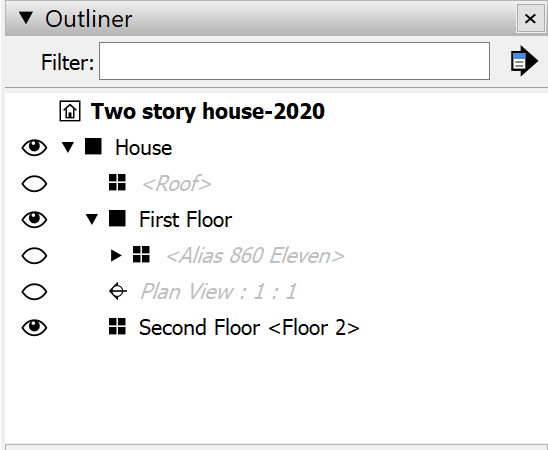 Controlling visibility with the Outliner

As mentioned in the table earlier in this article, any item that's grayed out in the Outliner is hidden. Indeed, the Outliner can be a helpful way to hide or show elements in your model as you work on it.

To hide an object or section plane in the Outliner, simply toggle the eyeball icon off or context-click it and select Hide from the menu that appears. Everything your element contains becomes hidden. For example, to hide everything in the second floor and see only the first floor, all you have to do is hide the Second floor group and Roof group, as shown in the figure. 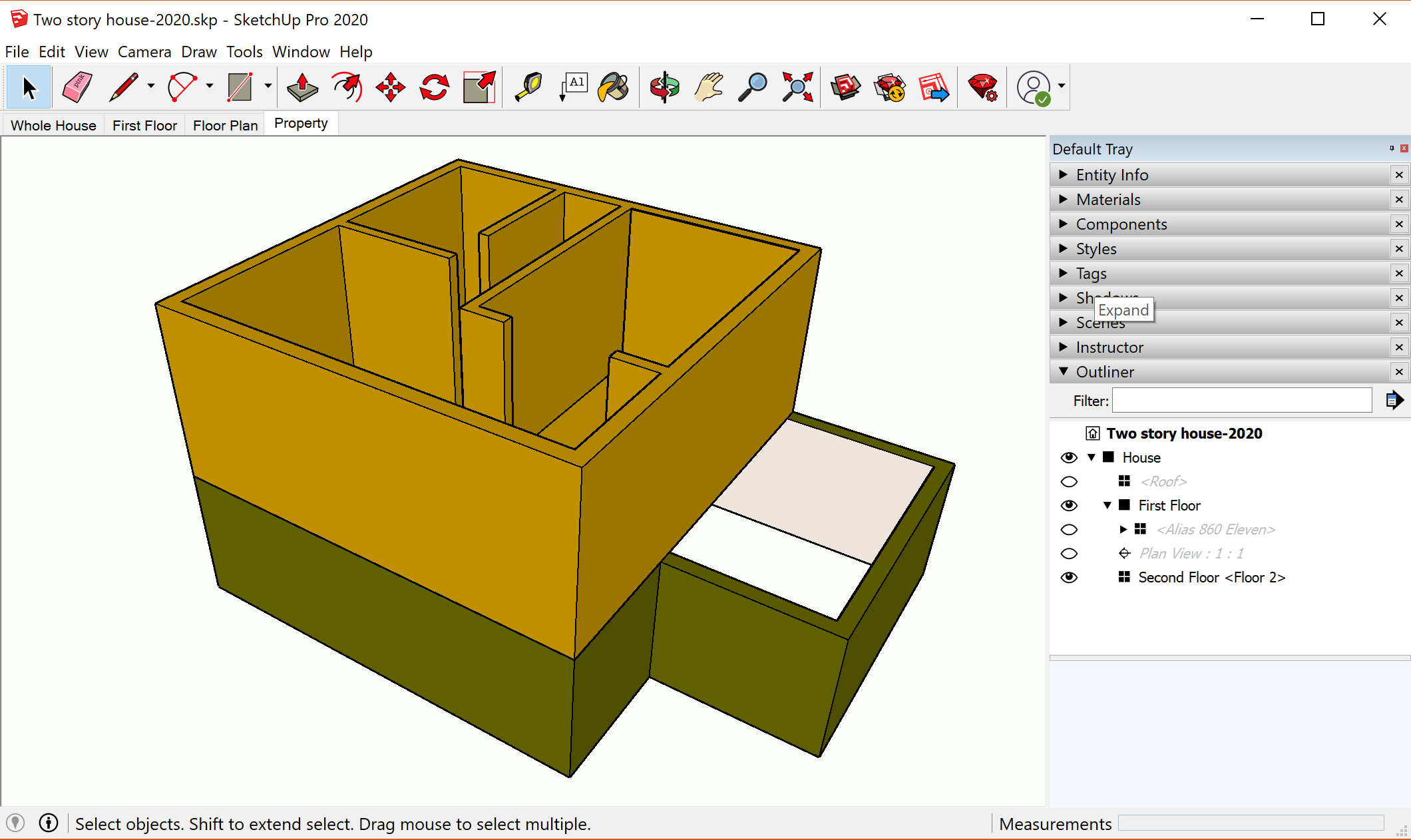 To see the hidden object or section plane again, toggle the eyeball icon on or context-click and select Unhide.

You can actually edit geometry in your SketchUp model even if it’s hidden within the Outliner. Just select the Object from the Outliner list and it will be visible in the model window in the hidden wireframe mode. Double clicking that object (either in the model window or Outliner) will allow you to enter the context and make edits as you would a normal, visible piece of geometry.

When you’re done, you just switch to the Select tool and click outside of the object to finish. It will disappear with your edits applied.