Glazing Ratio - How Its Calculated

Glazing Ratio - How it's Calculated

This article explains how we generate the recommended glazing ratio scores in the PreDesign Glazing Ratio feature. Specifically it explains:

Generally speaking, our recommendations mostly look to ASHRAE 90.1 (2017) for inspiration and assume the designer is seeking equivalent performance to a baseline building facade.

In the Glazing Ratio feature, each strategy is given a score with a recommended maximum glazing ratio, shown as a percentage. See below for an example - the 4 strategies here have maximum ratios ranging from 22% to 56%. Note the options are always ranked highest to lowest in the way they are presented. 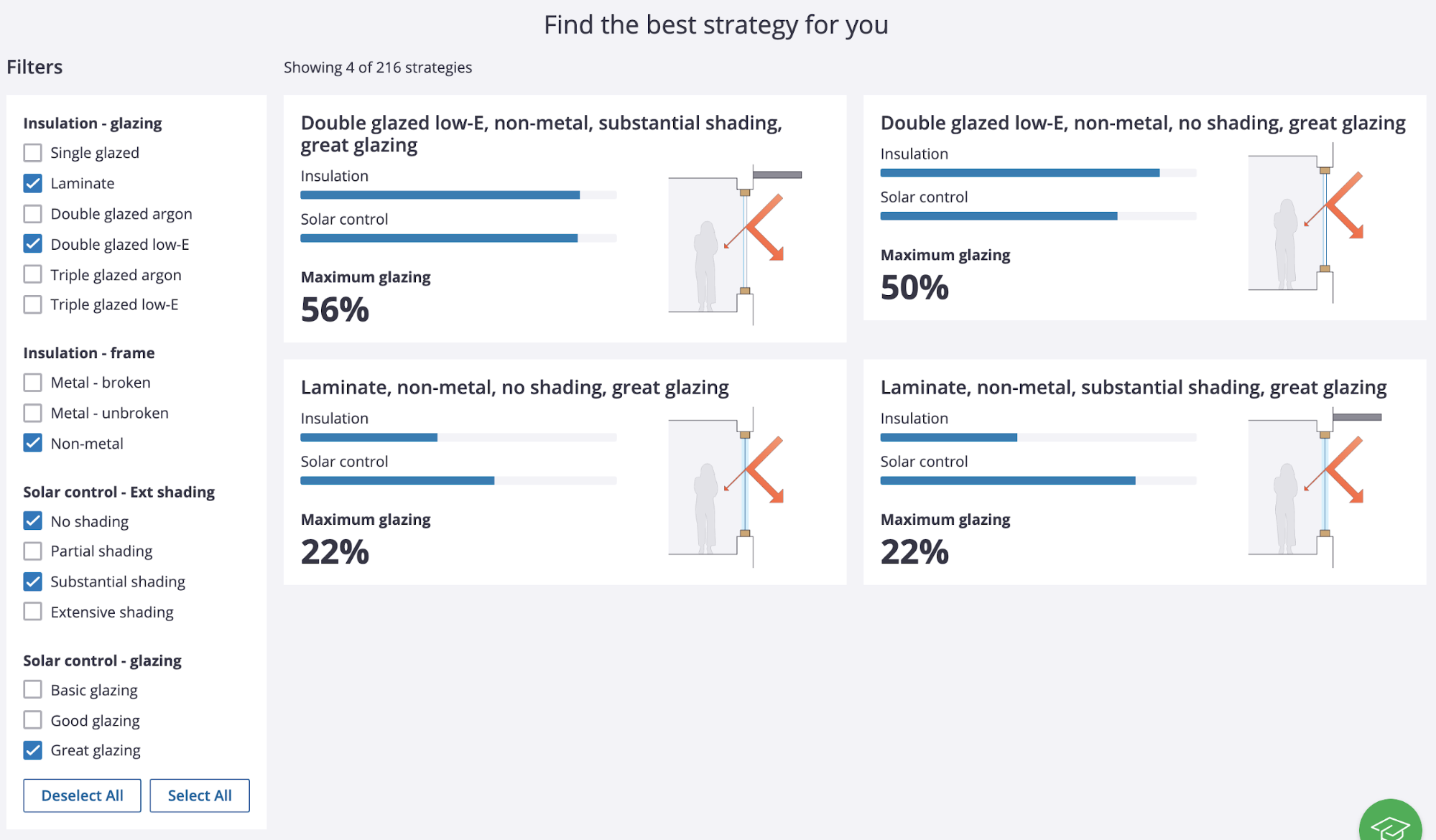 The ASHRAE 90.1 standard incorporates a method where the designer creates a baseline version of their design and then compares a proposed design against the baseline.

If the proposed design is at least as good as the baseline, then the standard has been "passed". Usually this is done with a full energy calculation, but of course at PreDesign, we don't even have a 3D design and we probably don't have anyone around who can do energy calculations!

We do this broadly as follows:

How it works in cold weather

We use the standard to find out 3 values for the baseline model we compare against:

These values vary by building type and by climate zone. For cold weather, orientation makes no difference. In climate zones where there is no winter, we ignore this consideration.

We then work out an effective baseline U-value for the entire facade assembly.

We then look at each strategy. We firstly determine:

Note this value is the same for each orientation.

How it works for direct sun

In working out how direct sun should affect how much glazing is used, we first look at each orientation and try to determine whether or not the facade has a direct sun problem.

This is done in the same way we work out whether or not shading is recommended for that facade, which is described in full elsewhere.

In short, we do the following:

This number then needs to be above a threshold for the facade to be considered to have a direct sun problem. (see table below)

If we conclude there is a problem, then we proceed to the next part of assessment. If not, direct sun is not considered a factor for that orientation in determining glazing ratio.

If direct sun is considered to be a problem, we use the standard to find out 2 values for the baseline model we compare against:

These values vary by building type and by climate zone. Orientation makes no difference here. Then we do the following:

Using these two values and the assumption that the opaque facade has an SHGC of 0%, we work backwards to determine the % of glazing for the proposed strategy that would achieve the same "effective facade SHGC" as the baseline. This becomes the solar control maximum glazing value (a percentage).

The following tables provide look-ups for the baseline values used in the calculations.

U-values for Glazing and Wall assemblies and baseline SHGC for glazing (from ASHRAE 90.1 (2019)