SketchUp enables you to reposition the drawing axes in a few different ways:

Other times, you may want to hide the drawing axes. For example, in a finished model of a chair or even a house or street scene, the drawing axes may distract from your final model, rather than help you draw it.

For specifics about adjusting or hiding the drawing axes, see the relevant sections in this article.

Moving and rotating the drawing axes

Here, you find detailed steps for adjusting the drawing axes with the mouse or via the options on drawing axes context menu.

Tip: Before you adjust the drawing axes, find the best view of your model. Often, that’s a corner to which you want to align the axes, either from the top or the side. You can orbit around or select an option from the Camera > Standard views submenu. (See Viewing a Model for a more in-depth look at your viewing options.)

To adjust the axes with your mouse, follow these steps:

Tip: As you reorient the drawing axes, keep an eye on the blue axis. Unless you want to flip your model (and the flip and rotate features offer better ways to do that), make sure the blue axis points up. It is possible for it to point down or to the side as you hover the mouse cursor around looking for new axis points.

To align the axes to a face, context-click the face and choose Align Axes from the menu that appears.

The following figure illustrates how the face you context-click reorients the axes: 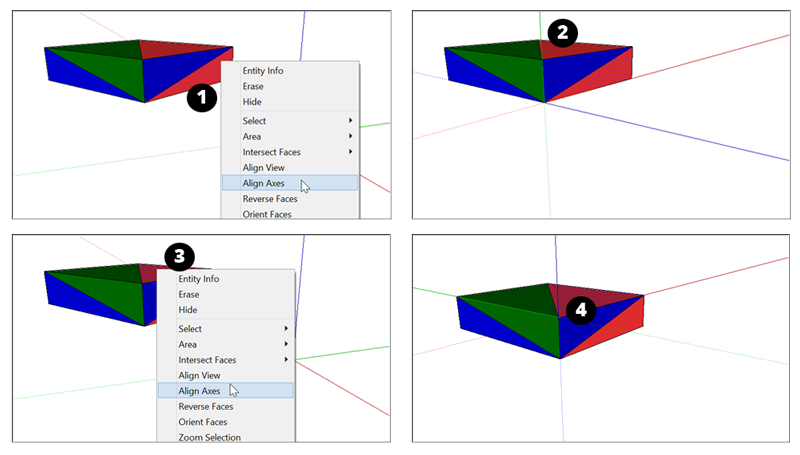 Because of this behavior, the Align Axes command is often useful when you’re drawing a 3D model from a 2D shape that’s currently on the ground plane. Select the 2D face on the ground plane, and the drawing axes become aligned to the lower-left corner before you start drawing in 3D, as shown in the following figure.

To move and rotate the axes relative to their current position, follow these steps:

In the following video, see how repositioning the drawing axes works and learn a few tips to help you use the different methods.

If you’ve been moving the drawing axes hither and yon, you can move the axes back to their default position pretty easily. Simply context-click an axis and choose Reset from the menu that appears, as shown in the figure. 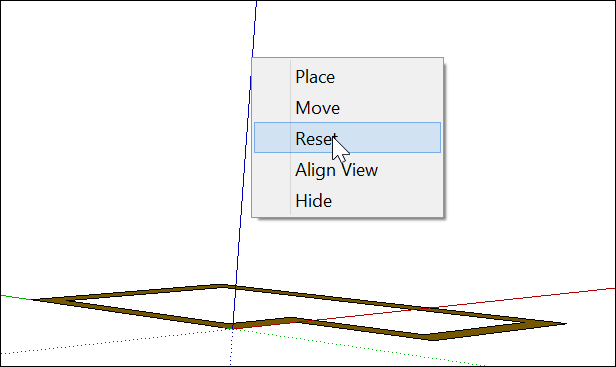 SketchUp enables you to hide the drawing axes in two ways:

Aligning the drawing axes with the cardinal directions

Each axis has a solid line on one side of the origin and a dotted line on the other side of the origin. The solid blue line leads up from the origin and the dotted blue line leads down. The remaining lines correspond to one of the cardinal directions (north, south, east, west). The following table outlines how each line corresponds to a cardinal direction, leading from the axes origin point.