Shading - How It's Calculated

This article explains how we generate the results that are displayed in the Shading lens in PreDesign. Specifically it explains:

Many SketchUp users employ the shadows feature in SketchUp to understand when parts of a building or site are in sun or in shade. One observed limitation of this process is that shadows assume that it is always sunny and do not offer any insight as to whether the sun’s impact on the building is likely to benefit the building or be detrimental to the building.

The shading feature is therefore based on the idea that information about where the sun is coming from (and the shadows it casts) can be enhanced considerably with a historical assessment of the prevailing conditions at that time, and how those conditions affect different buildings.

To do this, we decided to develop a way to characterise the sun quality at any time to be one of three things:

We use these characteristics in different ways within the shading feature to make recommendations about whether shading is needed or not and to assess different shading options.

There is no model uploaded in PreDesign and therefore no known geometry. Instead, we had to determine a way to characterise the sun’s quality without the existence of a building model. To do this we used the notion of Balance Point Temperature (BPT).

BPT or similar methods are documented in a range of texts. The idea is to derive an ambient temperature outside that is considered to be the condition at which heat gain inside the building equals heat lost to outside.

In other words at the balance point temperature:

The balance point temperature varies depending on the assumptions that have been made about a building’s internal loads and facade design. The table below summarises these assumptions and the resulting BTE for each building type.

The determination of BPT is based on an imagined perimeter room depth of 4 m and a wall height of 2.7 m.

Note for our BPT calculations we assume no heat gain from the sun or sky. It’s therefore a constant value.

The BPT is used in combination with the following key hourly values to work out whether the sun is beneficial, warming or overheating:

The higher these values are, the greater the heat that will be added to the building by exposure to the sun and sky. These values are therefore used to modify down the BPT. For a full reference table of how the BPT is modified, see the end of this article.

For each time step, the modified BPT is compared with the dry bulb temperature outside as follows:

(The modified 3 above is used to allow for a temperature band on either side of the setpoint).

For each situation, the minimum degree hours is zero. 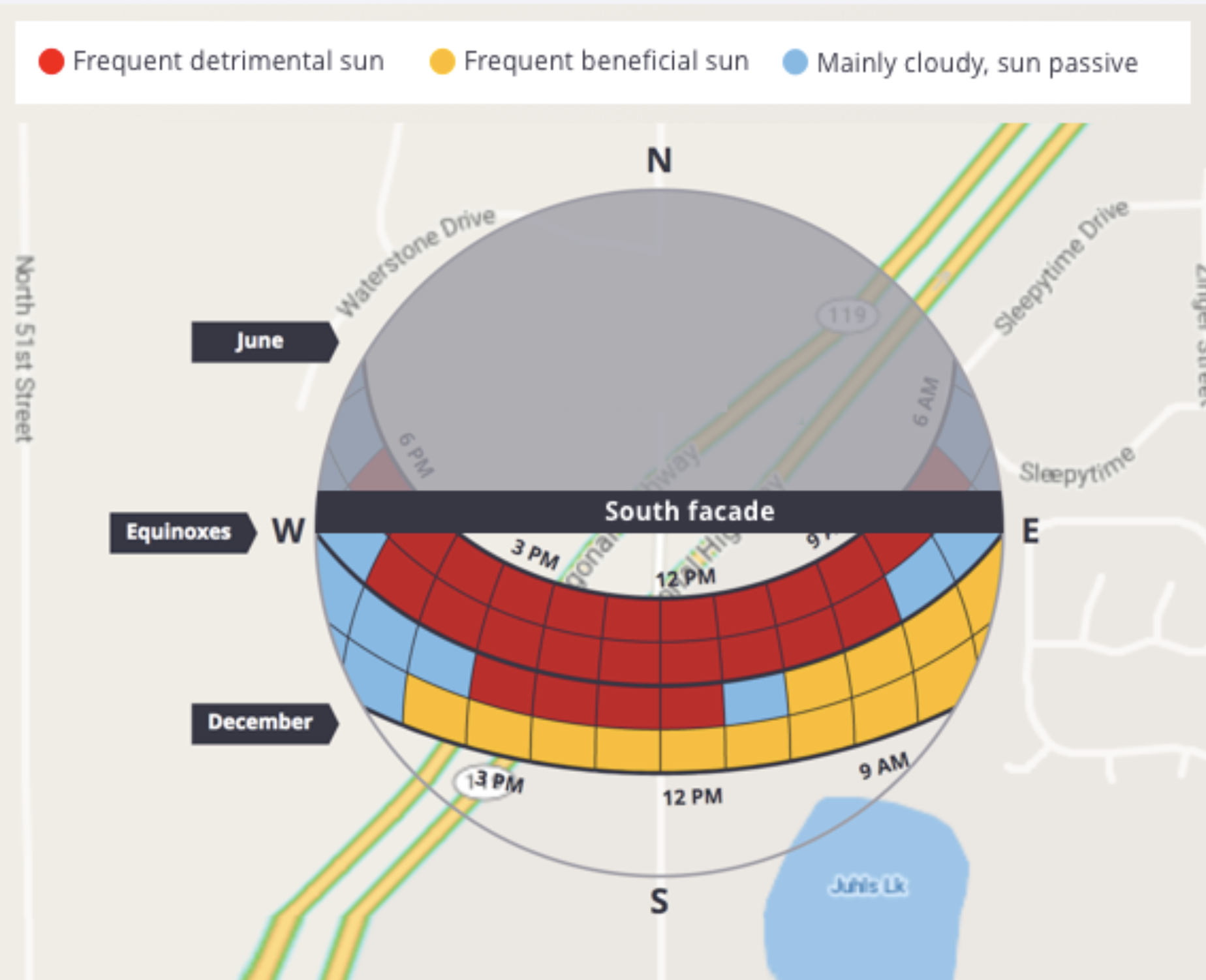 The patches shown in the sun path each represent a “Set” of approximately 90 different days (at the same time of the day) where the sun is in approximately the same position in the sky.

How Shading Recommendations are made

Although patches are used to help visualise trends over the year on a sun path diagram, the actual recommendations of the need for shading and star ratings for each of the shading options are carried out on an hourly basis.

In the summary view of the shading page, we publish some information including a shading recommendation (example below). 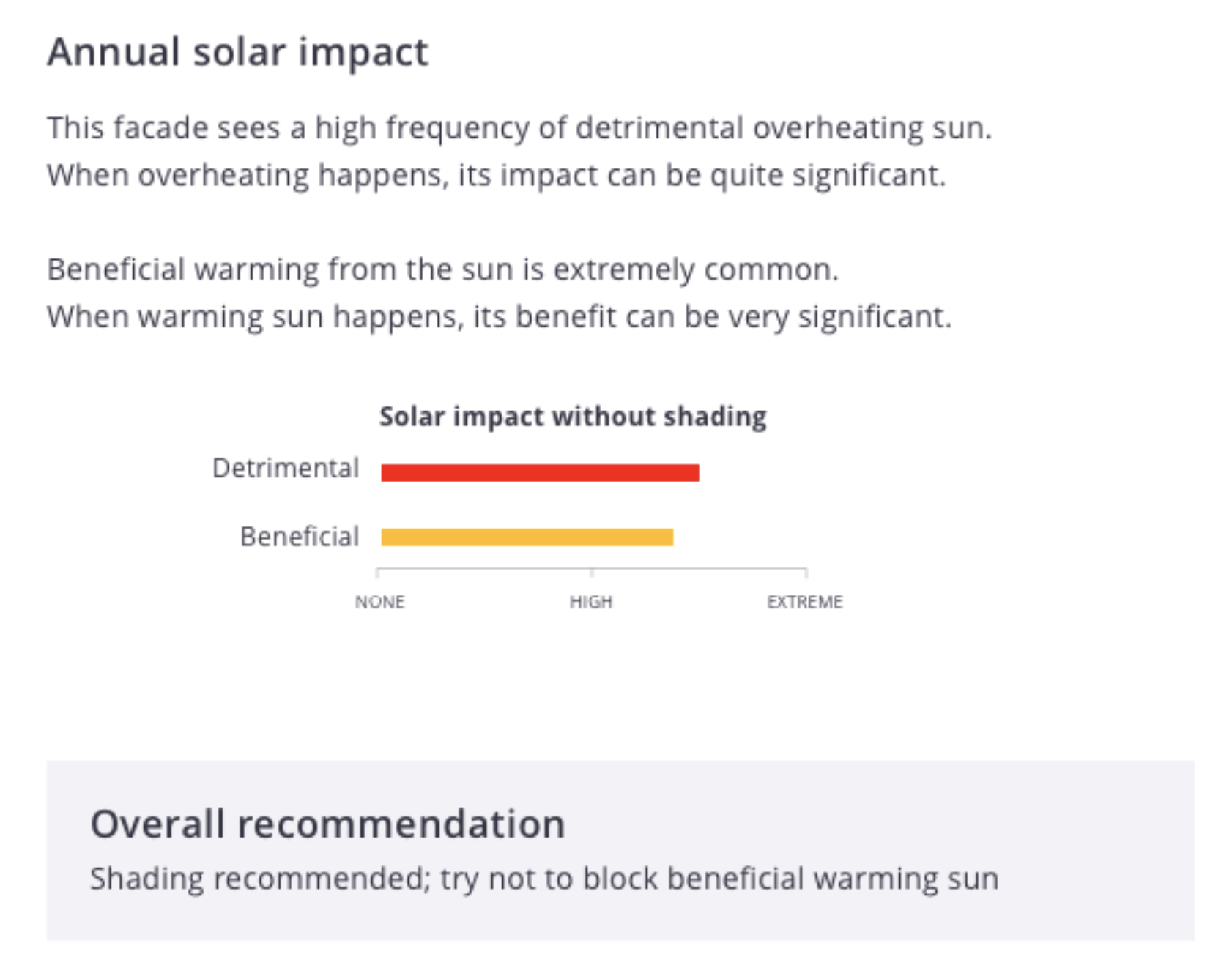 To calculate this, for each time step we do the following:

These two values are communicated on this chart in the summary view.

The table below summarises how we use these values to make a shading recommendation for each facade:

How Shading Options are scored

Shading options are presented in PreDesign as shown below.

For each shading option, at each time step we then

This gives us for each shading option: 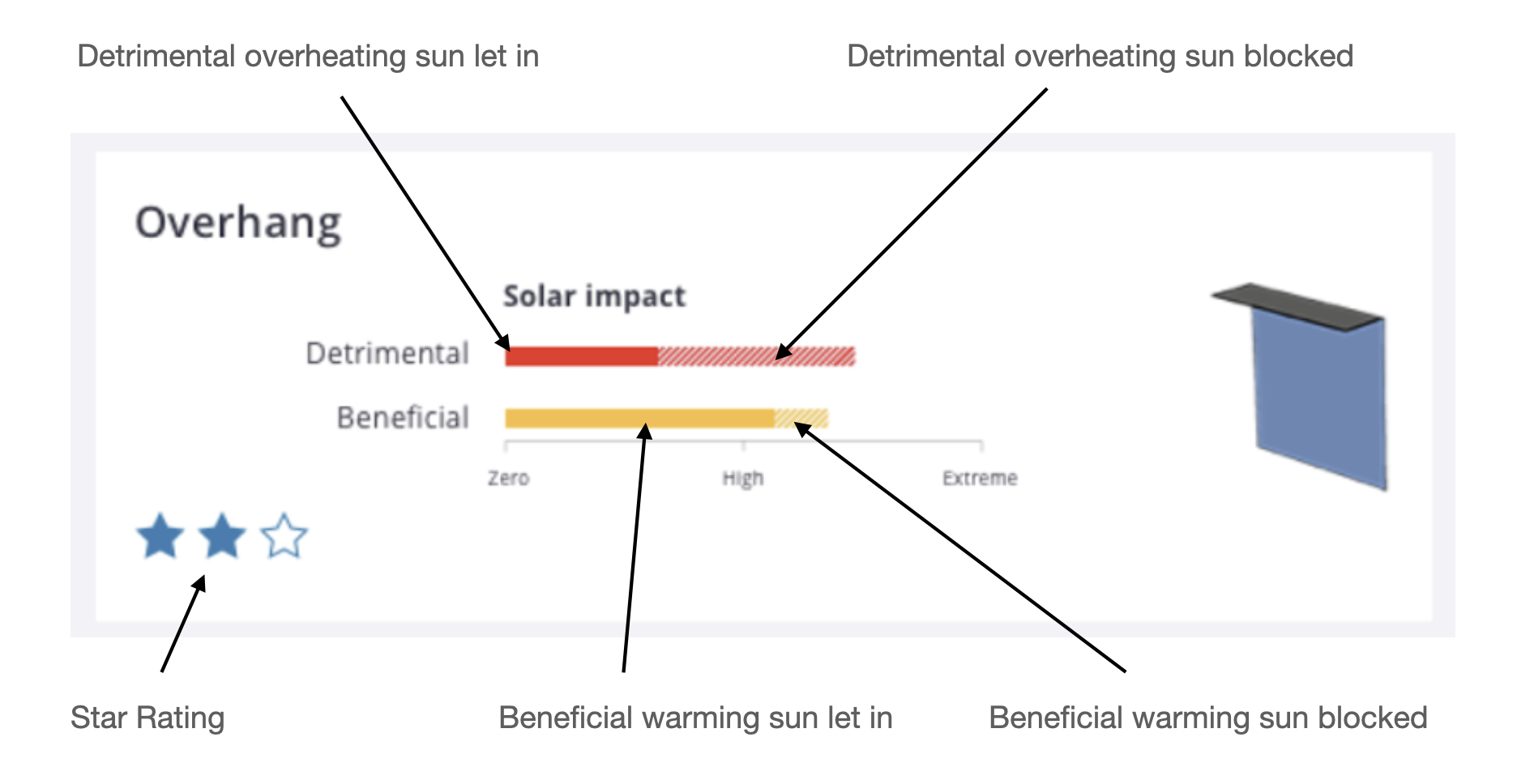 The star rating for the option is based purely on the amount of overheating and warming sun blocked by the shading device.

For no shading, the equation is slightly different and based solely on the unshaded amounts:

Stars are awarded based on the final score as follows:

The use of Balance Point Temperatures has been partly borrowed from the following references: