In any given release, we strive to make SketchUp more reliable, efficient, and useful. While we sometimes shy away from changes that may disrupt your modeling experience, this release features changes to modeling behavior meant to standardize usage patterns across core SketchUp tools. Our goal is to improve the consistency of how modeling works from tool to tool, to improve the efficiency of individual tool workflows, and to improve the learnability of SketchUp's most nuanced behaviors. Read on to learn about the patterns we are trying to establish, as well as the impact on individual tools.

Likely the most explicit change you will notice is that more tool 'modes' behave as toggles that can be turned on and off by tapping a key. This means fewer press-and-hold modifier interactions (for tools like Scale), as well as -- we hope -- more predictable modeling outcomes and more efficient usage across multiple tools.

Modifiers will also persist across when you hit Escape to cancel out of an operation. Changing tools resets a modified tool to its default state, as will toggling off a modifier or hitting a tool's shortcut key.

Many SketchUp tools -- like Rotate, Rectangle, Circle -- already feature the ability to 'pre-lock' an inference direction or drawing plane. In this release, we are applying this pattern to other tools as appropriate. To start, you're now able pre-lock an inference direction before the first click with the Line, Tape Measure and Move tools.

Notably, we have not changed the ability to temporarily lock an inference by pressing and holding the Shift key. That's one of a few examples where we think the existing press/hold keyboard interaction patterns are important to preserve.

The Line tool is now enabled to pre-lock an inference drawing direction.

Eraser modifiers can now be triggered with a toggle key press and persist across multiple click-drag actions. Notably, Eraser is still enabled to work by pressing-and-holding a modifier key. So, if you tap the Shift key, you will toggle on Hide in a persistent way, and if you hold down Shift, you will enable Hide only until you release the key.

While we were at it, we took the opportunity to enhance the Eraser tool's optional modes by adding the ability to unhide geometry using the existing unsmooth mode – so, now it's an 'unhide/unsmooth' mode.

Push/Pull's modifiers -- Create New Starting Face and Stretch -- are both toggles and they persist across multiple interactions. Push/Pull also has a slightly different cursor art across its modified states.

If you're wondering what Push/Pull 'Stretch' is, you will not be alone. Stretch is a tool mode that has actually existed in SketchUp for years, but has never been referenced in the Status Bar or received distinct treatment in the Push/Pull cursor. 'Stretching' a face is roughly equivalent to moving the face perpendicular to its drawing plane.

Both Move tool modifiers -- Copy and Autofold -- now persist across multiple moves. This behavior applies to moving pre-selected items as well as to 'hover-to-select' Move operation. Also, the inference direction can be locked before the first click of a move.

Scale tool modifiers -- About Center and Toggle Uniform -- are now toggles and persist across multiple operations within the Scale tool.

The Tape Measure modifier -- Toggle Create Guides -- persists across multiple operations. If you were paying close attention, this is actually a change we introduced in SketchUp 2020.2. Similar to Line and Move, the Tape Measure tool's inference direction can be locked before the first click.

Alongside improvements to Push/Pull noted above, we are also making a change to front face (or 'normal') orientation when drawing stuff in SketchUp. Now, SketchUp will always orient faces with the front side facing up, when drawing on the ground plane, and with the front face 'facing' the camera in other cases. If a face is drawn over the top of an existing face, the new face will still inherit the orientation of the face that it is drawn on. With these 'butter-side up' faces, double-click Push/Pull operations behave more predictably and push-pull copy operations result in 3D meshes that are much more likely to result in correctly oriented faces. Additionally, the Follow-me tool will now create extrusions with the front face oriented outward in most scenarios.

Many SketchUp extensions that either import or create large amounts of geometry in a given operation rely on an API class called PolygonMesh. These operations that use this class can be very slow depending on the import size or complexity of geometry created. In 2021.1, we are introducing an orders-of-magnitude improvement to how efficiently SketchUp's API handles PolygonMesh operations. In this case, the larger the operation, the bigger the improvement. The good news is that most extension developers do not need to do anything different to take advantage of this improvement. We expect you'll notice the difference in extensions like Artisan, SUbD, Bezier Surface, and Skimp. For more details on how to leverage the performance improvements refer to the API documentation.

The Extensions menu is stepping out into the sun. From here out, this menu heading will always be visible, regardless of whether extensions have been installed there or not. We've also relocated extension management and developer tools to this menu.

You may be interested to know that we recently published Extension UX Guidelines for SketchUp Developers. We want to help developers make extensions that function predictably in SketchUp and fit nicely in a user's mental map of our application. (That goes for the things we build too!)

With this release, you can now download Live Component models from 3D Warehouse whose parameter units will respect the unit settings of your model. This should make it a bit faster to determine the proper parameter input for a Live Component while modeling. With a recent update on 3D Warehouse, all Live Components in our SketchUp Labs account are now enabled for unit translation.

We are also introducing a modest improvement to the drawtime of Live Component editing. We have more efforts in the works to make Live Component configuration more persistent and responsive when working across multiple objects.

SketchUp now ships with an IFC 4 schema that you may use to apply classifications in Entity Info or with the Classifier tagging tool. And IFC4 is now a supported export file type.

PDF library upgrade for SketchUp and LayOut on Windows

We've updated the libraries that SketchUp and LayOut use to generate PDF exports. Along with this update, we also tried to squash several bugs related to undesirable artifacts or effects in exports. 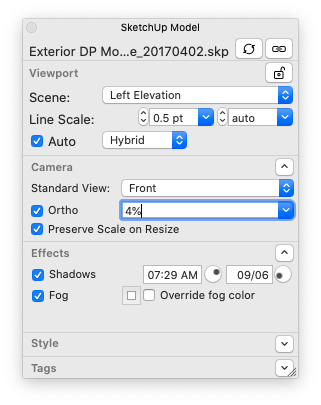 We zeroed in on a particularly unsatisfying experience in LayOut: scanning a long list of scales for the exact one you want, or going on a detour to Preferences to set a custom scale. Now, you can simply type in a scale in the Camera tab of the SketchUp model panel. This new type-to-input will neaty parse a number of inputs: type 1:50, 1” = 50”, 1/50, .02, 2%, or even 6” = 25' will all quickly apply a 1:50 scale to a viewport.

There has always been a gap in the API around projected materials. We've added new methods to make it possible to set projected textures. See the API docs for further information regarding how to use these new API features.

Notable bug-fix in Ruby 2.7.2 is correcting a bug that prevented profiling tools such as ruby-prof from reporting correct results. (bugs.ruby-lang.org/issues/17152) Now you can use SpeedUp with SketchUp 2021.1 to profile your extensions.

We improved the UI::HtmlDialog class by working on a number of bugs and feature requests reported to us in our GitHub API Issue Tracker project. We made setting the dialog focus to be more consistent across Window and Mac platforms, as well as adding the ability to set focus back to the SketchUp window. We also added some missing getters for window size and position, and we made it possible to set the window size based on the size of the HTML content, instead of the outer frame. This way you don't need to worry about the window padding that might be added by different systems, you can set the window size based on the size of your content and SketchUp will size the outer frame correctly.

We worked to upgrade the internal version of Chromium Embedded Framework that we ship. We are now using CEF 88. This affects all of the HtmlDialog class HTML windows. To help make it easier to check what CEF version is active inside of SketchUp, we also added two new Ruby constants to help quickly identify the embedded CEF and Chromium versions.